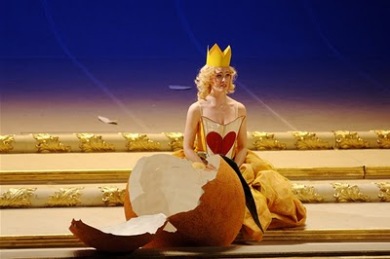 This time around we will visit one of our favorite little Russian Geniuses, Sergei Prokofiev (OK fine he was technically Ukranian, but most music historians still consider him to largely be an important Russian composer), and talk about his most famous opera, “The Love of Three Oranges”. This work of art is charming as it is witty in making fun of the government officials without being outright scandalous.
Although the opera pokes fun at that powers that be in Russian it is important to make the distinction that this Opera was written originally in America for a Chicago audience. In 1918 Prokofiev was allowed to travel to the USA in hopes that he would spread the word about the success of Russian art in America. Needless to say this trip went swimmingly. After presenting a recital including the famous Piano Concerto No. 1, performed by the composer himself, Prokofiev caught the eye of Cleofonte Campanini(principal conductor and general manager of the Chicago Opera). He awarded Prokofiev a commission to compose a new opera for the company and thus the work in progress Prokofiev had in his repertoire was completed, “The Love of Three Oranges”. Although this opera does have a Russian libretto, it would have been quite inappropriate to present a Bolshevik themed opera in the Russian language to an American audience, thus the libretto was translated and premiered in French.
The plot of this opera by nature makes little sense and is more importantly meant to entertain through the use of satire. Just FYI, it is based on an old Italian Fairy Tale. Well here goes…

Act 1:
The King of Clubs and his adviser Pantalone are worried about the health of the Prince, a hypochondriac whose symptoms have been brought on by an indulgence in tragic poetry. Apparently his ailment can only be cured with laughter, so Pantalone summons the jester Truffaldino to arrange a grand entertainment, together with the (secretly inimical) prime minister, Leandro.
The magician Tchelio, who supports the King, and the witch Fata Morgana, who supports Leandro and Clarice (niece of the King, lover of Leandro), play cards to see who will be successful. Tchelio loses three times in succession to Fata Morgana, who brandishes the King of Spades, alias of Leandro.
Leandro and Clarice plot to kill the Prince so that Clarice can succeed to the throne. The supporters of Tragedy are delighted at this turn of events. The servant Smeraldina reveals that she is also in the service of Fata Morgana, who will support Leandro.
Act 2:
All efforts to make the Prince laugh fail, despite the urgings of the supporters of Comedy, until Fata Morgana is knocked over by Truffaldino and falls down, revealing her underclothes — the Prince laughs, as do all the others except for Leandro and Clarice. Fata Morgana curses him: henceforth, he will be obsessed by a “love for three oranges.” At once, the Prince and Truffaldino march off to seek them. Yeah really…
Act 3:
Tchelio tells the Prince and Truffaldino where the three oranges are, but warns them that they must have water available when the oranges are opened. He also gives Truffaldino a magic ribbon with which to seduce the giant (female) Cook (a bass voice!) who guards the oranges in the palace of the witch Creonte.
They are blown to the palace with the aid of winds created by the demon Farfarello, who has been summoned by Tchelio. Using the ribbon to distract the Cook, they grab the oranges and carry them off into the surrounding desert.
While the Prince sleeps, Truffaldino opens two of the oranges. Fairy princesses emerge but quickly die of thirst. The Ridicules (Cranks) give the Prince water to save the third princess, Ninette. The Prince and Ninette fall in love. A body of soldiers conveniently turns up and the Prince orders them to bury the two dead princesses. He leaves to seek clothing for Ninette so he can take her home to marry her, but, while he is gone, Fata Morgana transforms Ninette into a giant rat and substitutes Smeraldina in disguise.
Act 4:
Everyone returns to the King’s palace, where the Prince is now forced to prepare to marry Smeraldina. Tchelio and Fata Morgana meet, each accusing the other of cheating, but the Ridicules intervene and spirit the witch away, leaving the field clear for Tchelio. He restores Ninette to her natural form. The plotters are sentenced to die but Fata Morgana helps them escape, through a trapdoor and the opera ends with everyone praising the Prince and his bride

Anyways Below is a recording of one of my personal all time favorite compositions, the “March” from “The Love of Three Oranges”!